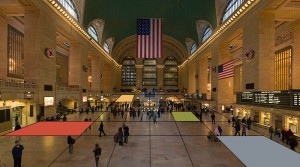 When I sifted through my composition journal over the weekend, I came upon this loose thread of an idea that still resonates with me. As is often the case, this piece began with an image that I translated into the above collage:

Just as the rush hour crowds have safely made their trains, and the terminal creaks towards the evening, schools of people walk together and then away, gently sensing their proximity to each other. They shift with the shuffling stragglers, altering their paths as they hear the possibility of a unity, each one of them sounding …

The idea I had was to have individuals walking around Grand Central terminal with handheld devices that sensed their proximity to other people with similar devices and reacted sonically to the degree of proximity. (In consultation with some engineers, I figured this could be done with iPhones, though I am still not thrilled with the idea that participation would be solely based on ones entry into the trendy tech world.)

As I continue to think about this piece I have rediscovered a piece called Vespers by Alvin Lucier that has performers moving around a dark room with echo-locators, modeled after the behavior of bats. I also have given some thoughts to something Anthony Braxton calls the friendly experiencer, where the listener actually controls his/her own experience of the music by adjusting their own position in a listening environment.

These are both fluid and interesting approaches to the possibilities of walking and sounding, and I know from my interactions with these two artists that they are only the tip of the iceberg in terms of the potential impact.

I would like to contribute the possibility that walking and sounding also be considered from the vantage point of choreography. The above image of Grand Central raises the question of whether movement of people in a given space might be dictated by their sound, both in isolation (with headphones) and as a group in relation to one another. I am not necessarily thinking of something like the soundwalks of Janet Cardiff , nor of the derive of the Situationalists. No, the urge to organize movement through sound comes from a more base desire to create group formations, not unlike those of the brilliant Hollywood choregrapher, Busby Berkeley.

Having now gone down this road, perhaps this approach seems slightly manipulative, but I am hoping this is a necessary step on the way to something more subtle. Stay tuned…