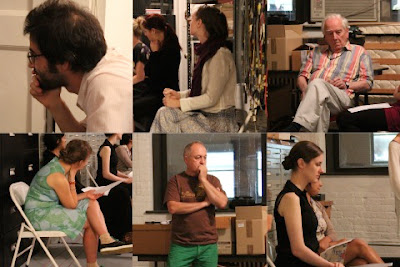 By way of a lucky encounter with my friend and fellow raconteur, Dave Ruder, I got invited to participate in an upcoming performance of Robert Ashley’s early opera “That Morning Thing,” which will play at The Kitchen from November 19-21 as part of Performa 2011.

I have long been an admirer of Ashley’s work and, being in the midst of work on my own opera, I couldn’t pass up the opportunity to learn more about how Ashley works. His operas have the special feeling of arriving fully formed from a distant planet, where everyone speaks with a mellifluous tone and has detailed stories and observations about things you think you know about or at least have some memory of (even if this is completely fabricated).

As it happened, our rehearsals for the piece coincided with my purchase of a new camera (which I am enjoying immensely). I have been documenting the rehearsals ever so slightly for the production blog, but thought I would share this above photo as a reflection of my excitement for the production. The photo is a response to some of the directions for the male performers in Act 3 who are asked to sit in the ways that “men do when they are thinking.” Having rehearsed this 5 minute section several times, it was hard not to see more clearly that, while men may have their own way of looking while they are thinking, women also have some close-looking variations of their own. I don’t know whether this observation is due to an actual relationship between physical gesture, or perhaps a reflection of the ways that “sexed” behavior (and here I am using ‘sex’ in place of ‘gender‘ per Bob’s preference) has changed in the forty years since the piece’s premiere.

To find out more, you will need to come out to the performance at the Kitchen….

Questions or Ideas? Write to me at [email protected]
Put Your Hands Together Experiments in Opera Inaugural Festival – January 16, 2012
Scroll to top