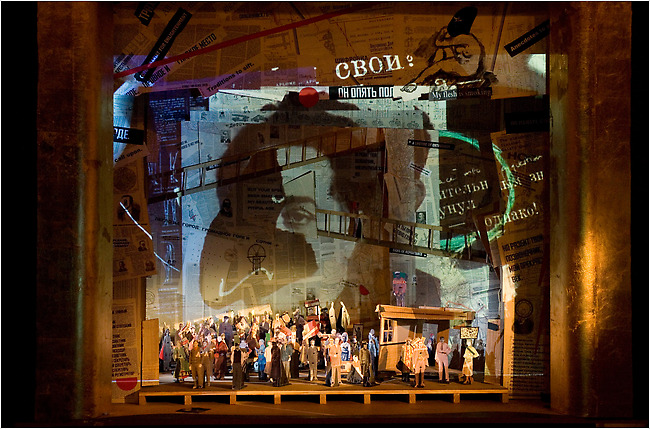 "The Nose" directed by William Kentridge

With the end of the year fast approaching, here come the “Best Of” lists.  With them also comes the sense that so much of what inspired me this year, was not new this year at all.  Instead, for whatever reason, there were a number of things that I encountered this year for the first time, even though they have been around for many years (or, in the case of one of these items,  200 years). I recognize the risk of seeming very uncool by acknowledging that it has taken me this long to come upon some of these items (see item 2 below), but am mostly glad that I finally did.  Here are my top ten favorite encounters of the 2010 (in order of when I encountered them):

10.  The Interrogative Mood by Padget Powell.  This novel (?) is written completely in questions.  A conceptual coup, yes, but also a riveting read.  When I finished it, I had to go back read all of Mr. Powell’s other works just to figure out how he got to this place.  I will let you know when I figure it out.

9. The Nose by Dmitri Shostakovich and Directed by William Kentridge.  This little seen opera is a thrilling adaptation of Gogol’s short story by the same name.  The music was mostly interesting (can’t say I am a huge Shostakovich fan), but the staging was revelatory.  Kentridge made tremendous use of the Met Opera’s resources and created an inspired drawing book of political history.

8.  I Am Love by Luca Guadagnino with music by John Adams.  Speaking of opera, this film was as emotionally manipulative as the best Verdi.  But, in terms of a tonal palatte (visually, symbolically, musically and emotionally), this luscious film was completely engrossing.  I think I held my breath for hours afterwards.

7.  Infinite Jest by David Foster Wallace.  I put off Mr. Foster Wallace’s ouevre when most of my peers read him in the late 90’s, but last year felt it was time to dig in. The essays and short works were enough to convince me to try my hand at this monster of a novel, and I can’t think of a better way to have spent four months of my life than engrossed in this lively, inspiring and devastating portrait of the human condition.

6.  Seventh Symphony by Ludwig Van Beethoven; performed by the Vienna Philharmonic at Carnegie Hall.  I enjoy Beethoven as much as any casual enthusiast, but until this captivating performance at Carnegie Hall’s opening night, I am not sure I can say that I have actually heard his music.  Now I know that, in the right hands, this music shimmers and trembles with as much power as anything out there.  Period.

"The Interrogative Mood" by Padgett Powell

5.  Selective Memory by Brian Rogers at the Chocolate Factory Theater.  If you haven’t been to this small “white-box” theater in Long Island City, go!  It is the definition of dedication to risky, engaging work.  As he has done with his previous work with live video, Brian Rogers asks that you embrace the images “on-stage”, both real and reproduced, with a thoughtful and playful sensibility.  With this piece, the payoff was enormous, and I left feeling both on my own and a part of something bigger than myself.

4.  Naldjorlak by Elian Radigue at Issue Project Room. This is music that takes before it gives, but over the long run (this performance was long and made time feel slower than normal) it changed my fundamental relationship to the world (pretty big stuff, right?).

3.  Too Hot to Handel at Carnegie Hall.  Granted, this was a performance I helped to produce, but it was also an awesome display of enthusiasm and skill by 200 high school singers who stole the show with their energy and dedication.

2.  Tonight’s the Night by Neil Young.  I am not sure how this  record slipped through my cracks, but I am so glad I know it now!  A sensitive-angry meditation on the frailty of life, this is a complete record from start to finish and even though it is clearly rocking, it also transcends genre with its immediacy.

1. “Gaucho” by Steely Dan.  The song more than the record, I heard this on a car radio late at night in the company of a good friend and suddenly felt appalled at the sound of every record I have ever heard before.  Yes, the lyrics are bizarro and macho (like a lot of the Steely Dan I know), but the groove is completely mesmerizing, the saxophone solo spot on and the sound!!  (did I mention how great the record sounds?)

Questions or Ideas? Write to me at [email protected]
New Memorize the Sky LP – “CREEKS” Cued Up on Q2: Aaron Siegel, LIVE – WQXR
Scroll to top